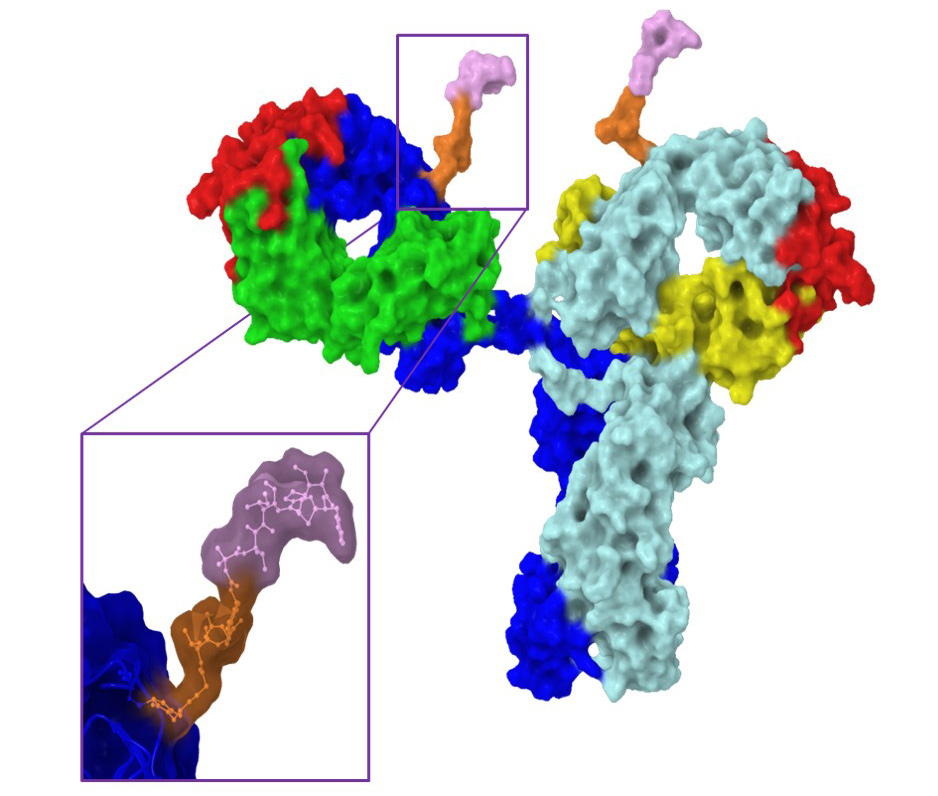 The Tumey Group is broadly focused on the medicinal chemistry of targeted drug-delivery technology. More specifically, the majority of our efforts are devoted to the design and application of antibody-drug-conjugates (ADCs). There are now 8 FDA-approved ADCs for the treatment of cancer.  As shown in the graphic below, our research projects are aimed at various aspects of ADC design – including the selection of appropriate antibody targets, the optimization of the ADC linker, the identification immunomodulating payloads, and the optimization of new conjugation chemistry.

We have recently reported a new method for the site-specific thiolation of a conserved glutamine residue on the heavy chain of IgG1.  We have recently received NIH funding to explore the use of this conjugation technology for therapeutic and imaging applications. (NIH R01 GM140026-01A1)  Specifically, we are attaching various metabolically labile payloads to the Q295 site in order to demonstrate improved biophysical stability and pharmacokinetics. Moreover, we are attaching Raman tags to this site in order to develop new imaging tools to understand ADC uptake and catabolism.

Our lab is broadly interested in immune-suppressive ADC technology for the delivery of glucocorticoids and other anti-inflammatory therapeutic agents.  This work is funded by R03 AI156696-01A1 and R15 AI149755-01.  One of the targets of significant interest is IRAK4 inhibitors, such as the one shown below.  These agents are not cytotoxic, but rather block TLR-mediated NFκB activation and cytokine release. We are exploring the utility of such agents in various inflammatory diseases such as rheumatoid arthritis, lupus, and crohn’s disease.

We have recently described a high-throughput FRET screen that identified asparagine-containing linkers that are rapidly cleaved in lysosomal extracts.  Unlike traditional ADC linkers that are cleaved by cathepsins, these linkers are cleaved by asparaginyl endopeptidase, also known as legumain.  With the support of newly announced funding from the NIH (R01 GM144450-01), we are exploring the utility of legumain-cleavable linkers in ADC technology.  Unlike traditional ValCit containing linkers, our linkers are not cleaved by neutrophil elastase, and therefore have the potential for decreased neutropenia and improved tolerability in humans. Legumain is also known to be secreted into the tumor microenvironment, and we are also interested to know if legumain-cleavable linkers may offer opportunities for extracellular payload release for non-internalizing ADC targets.

Traditional ADCs employ an antibody to deliver a cytotoxic agent selectively to tumor tissues. While this technology has been highly successful, the success of checkpoint inhibitors has given rise to a rapidly growing interest in the selective delivery of immunostimulants. We have developed ADC technology for the tumor-targeted delivery of cell-permeable TLR agonists. These agents have shown very promising activity in both in vitro and in vivo model systems.